One month already into the second class of Animals & Creatures. Class two so far feels harder in terms of concepts to learn, but at the same AM has changed a few things since last term, such as avoiding planning and polishing in the same week, which makes it better in terms of time management.

The lectures are really really good, packed with tons of information and/or walk-thrus by VFX industry veterans. We also have weekly Over the Shoulder Q&A's with Nicole Herr where she goes through hard concepts or grabs one of our assignments and talk us through what she would have done to improve it. Pretty amazing!

Next week we're starting our last assignment, which is a 7-week character interaction/fight assignment. That's gonna be cool!

Here's this weeks pass of the Church Landing Dragon assignment:

It's been a bit of a tough week with lots of frustration and the feeling of that I have no idea what so ever of what I'm doing. Getting the dragon to feel right in flight with a gazillion controls to potentially touch and with very little experience animating flying creatures or bag of tricks to fall back on (regarding flights) - has been a real struggle.

Taking a step back and looking at this rationally - this is actually really really cool. Being this far out of my comfort zone is something I know is super necessary in order to learn and grow as an animator, but I find it very hard to force myself this far out of it if I don't have to.

A sentence by Glen Keane (from Clay Kaytis Animation Podcast) has been a helpful reminder through the week: "When you run up against a problem - you always think it's because you're not good enough - but it's not that, it's just that you've hit the limit of your knowledge and you gotta go out and observe and find and discover something more - those are the best times when you feel like you stink and you can't get it any better and you're stuck - now the world is open and you're ready to learn something new. You gotta take advantage of that!"

One week left on this sucker - not sure how far I'm gonna get on this one, but I'm gonna do my best - and if nothing else, I'm confident that I'm learning a lot and getting a lot of mistakes out of the way.

Here's my blocking pass of the Church Landing Dragon:

This week we're starting working with live action background plates. For our next assignment we have a bunch of different plates to choose from, already matchmoved by Animation Mentor - which is supercool!

I was considering going back to the cat rig for the next assignment, which is a 3 week assignment - basically designed to get us introduced to working with background plates and matchmoves - but decided to stick to the dragon rig to learn as much as possible about flying creatures while I have access to an experienced mentor :) - I can always go back and do another cat test later.

Here's my planning for the next assignment: 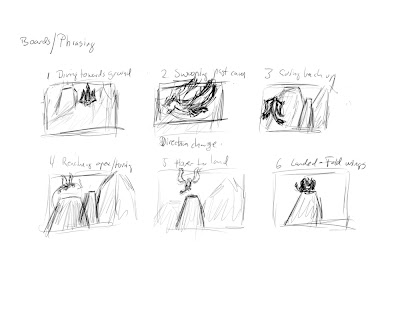 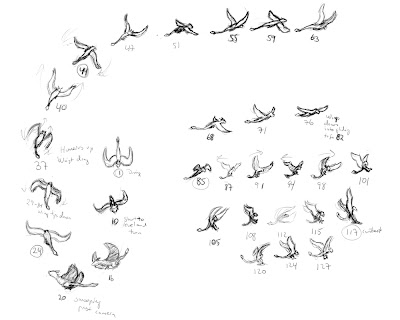 Here's a rough layout pass with the selected background plate. Based on feedback, I already know I'm gonna have to change this a little bit, but this is the essential idea:


And here's the revision of the flight cycle from last week:

After a VERY good and much needed break :), I'm ready and superexcited about diving into the second term of the Animals & Creatures Masterclass.

Again I've gotten a fantastic mentor, Keith Sintay, with over 17 years of experience, in both traditional and CG animation - and some really cool classmates that I already know I'm gonna learn tons from. This is gonna be pure awesomeness! 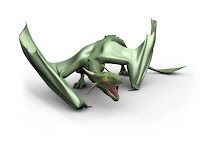 No relaxed first week this term. They're throwing us straight into a vanilla flight cycle with the new dragon rig. Even though it's a crazy cool rig - opening it for the first time with tons of controls and hardly ever animated anything flying at all - it's kind of scary.

I spent most of the week trying to wrap my head around the rig and figure out what controls that I'm most comfortable using etc. Also started to study tons of birds to get an idea of how this works.

Again, I have this really exciting/scary feeling of moving into a territory that's somewhat familiar in terms of animation, but totally new in terms of flying creatures and animal/bird behavior. It's a really really cool "I'm gonna learn a lot here"-feeling!

Here's the planning I did for this weeks assignment: 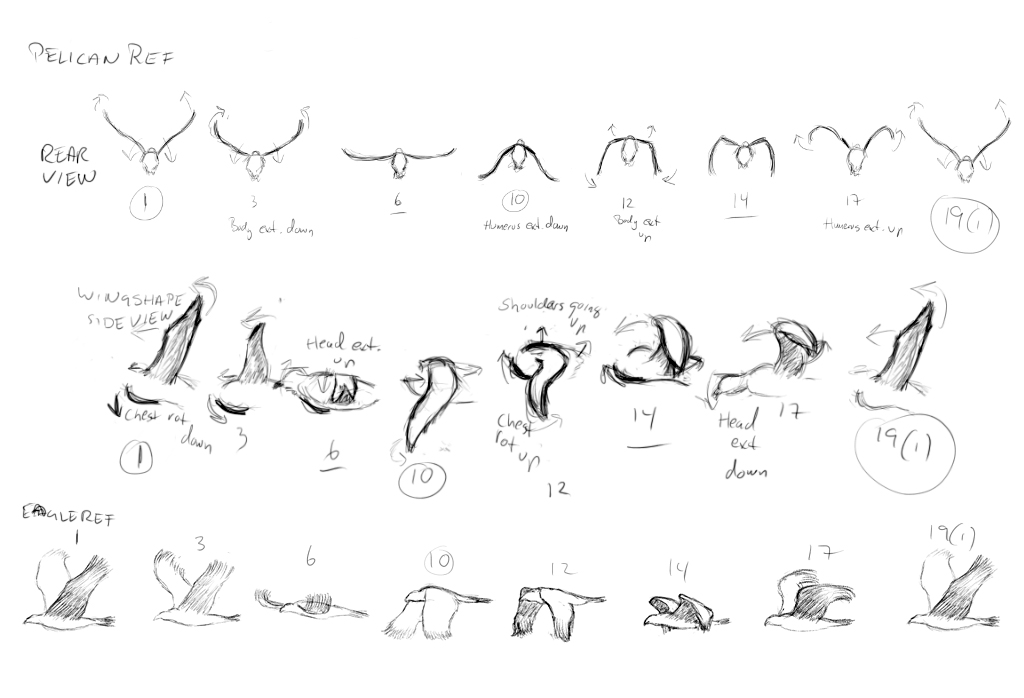 And here is the blocking pass of the vanilla flight cycle: