I don't think I could have gotten off to a better start with amazing classmates that have seriously inspired me through their work and a really awesome mentor, Kevin Koch, that went totally into the material and really explained in-depth in weekly e-critiques that often lasted 20-30 minutes.

I've learned so much this term, but what I think I've learned the most is the importance of reference - when to use it, what to use from it and what not to use. This not only applies to VFX and creature animation, but I hope I will have huge benefits from what I've learned in all the animation I will do from now on.

This week, I've gone back and addressed Kevins final notes on my assignments. In the Ogre shot I know I should have pushed it a lot more, but the way I've set up the shot, caused the rig to distort too much. It would be cool to start it over knowing what I know now about the rig - and maybe I will one day, but for now I'm just gonna take what I've learned with me into future shots and hopefully manage to get something cool out of it.

There's a week break before Class 2 starts and maaaaaaan do I look forward to that! It's fun, its awesome and it's supercool, but crazy exhausting :). After a week of recharging, I'm really looking forward to get into flights, working with live action background plates and fights/interaction between two characters. It's gonna be amazing.

Here's all my assignments from Animals & Creatures Class 1:

We had a really cool lecture with Tippet animator Will Groebe this week where he went through a shot all the way from planning to final. I always find it interesting to watch how others approach a shot and see other peoples workflow - super-inspiring.

I just kept pounding away on my shot this week and tried to get it to a more polished level. Kevins notes are as always really great and I'm learning a lot from his e-crits.

Next week is the last one for this term and this suppose to be the last assignment. I'm still gonna keep working on this shot next week though :)

Here's the second polish pass on my Ogre shot:

Week 10 already - getting close to the end of class 1.

This week I tried to get some energy into the shot, as well as work some more on details such as the toes and fingers etc.

I also did some re-timing here and there and tried to push the spacing a little bit further in an attempt to get a little bit more texture and variation into it.

Still quite a bit work left to do and one more week to go.

I've decided to move forward and do the second term of the Animal and Creature Class as well. Even though it is exhausting doing AM while working full time, it's so much fun and so much new supercool stuff to learn, that it's more rewarding than it costs (in terms of energy). Besides, it's only 3 more months -  It's doable.

I did a refining/blocking + pass on my Ogre test this week. I changed the beginning a little bit based on Kevins feedback and a couple of other things. I also did a clean up pass. It still lacks "omph", but hopefully I'll get some more energy into it next week.

We also had to do a page of drawings this week as part of the assignment. Even though it's takes some time from the animation assignment, I kind of wish we had to do it every week. It's so much fun to draw and I'm not doing it enough  - obviously :)

Here's my assignment this week (refining/blocking +): 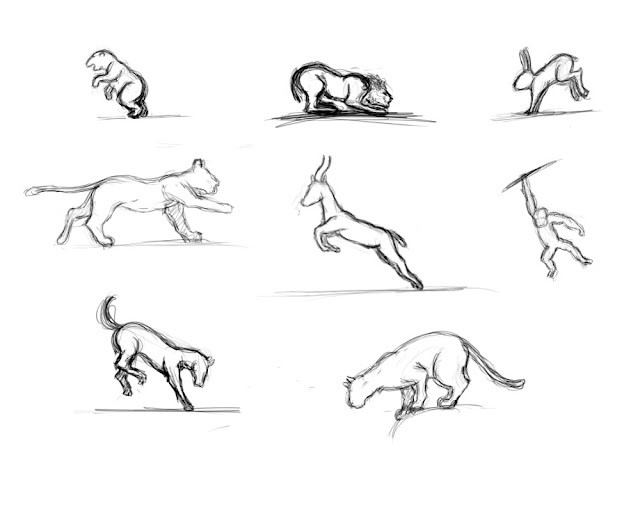